Most Americans do not have a college degree. Less than a third
of the labor force over the age of 25 has a bachelor’s degree and
only about 10 percent have graduate degrees. Yet, for most
professional or managerial jobs a bachelor’s degree is not just
preferred, but required. During the recession, with high
unemployment and large perceived candidate availability, more roles
began requiring advanced educations.

“Degree inflation comes both from employers trying to better
filter resumes, but also from the growing technical requirements of
many positions,” says Rob Romaine, president of
MRINetwork. “A draftsman used to need to go to a
technical school to learn how to translate an architect’s designs
into blueprints with a pencil and a ruler. Today, that position
requires the use of computer-aided design software, and
understanding of architecture, mathematics, science and technology.
And increasingly frequently, a bachelor’s degree in architectural
drafting and design too.”

The portion of job postings for architectural drafters requiring
a bachelor’s degree has grown from 41 percent to 56 percent over
the last five years according to Burning Glass. 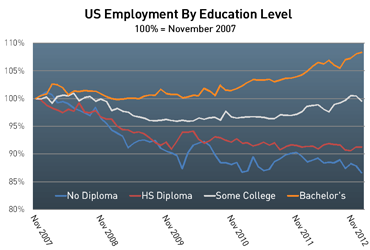 The unemployment rate for bachelor’s degree holders has fallen
from 5 percent in late 2010 to 3.8 percent in November and it is
just one small indicator of a lack of available professional
talent. While more jobs may require bachelor’s degrees, employers
are also seeking candidates with more experience, something not
necessarily obtained along with a degree. For those between 20 and
24 years old who want work, which includes recent college
graduates, the unemployment rate is 12.7 percent, nearly twice the
6.5 percent unemployment rate for those over 25 years old.

“In general, unemployed bachelor’s degree holders are younger,
less experienced, and less likely to be a match for the most
critical mid-career vacancies,” says Romaine. “While there are
clearly exceptions to this profile, finding the exceptions is one
of the hardest parts of hiring in this economic environment.”

Even while the economy has been growing over the last
year-albeit slowly-the impact on employment levels for those with
lower levels of educational attainment has been devastating. Total
employment for those without any college experience has fallen by
535,000 jobs in the last twelve months. For those with college
experience, however, total employment has grown by more than 2.5
million positions, with 1.9 million of those jobs going to
bachelor’s degree holders.

“For a company’s most critical positions you have to hire
someone who already has the education, skills and needed experience
on day one. For many roles there is little room for on the job
training and if there isn’t an internal promotion possible, they
will have to hire from the open market. That open market is a
candidate pool which even in a struggling economy is
extraordinarily tight,” says Romaine.