According to the Labor Department, employers added 88,000 jobs
in March as the unemployment rate fell from 7.7 to 7.6 percent. Job
creation was at a significantly slower pace than February when
268,000 jobs were created or than the 190,000 jobs a survey of
economists were projecting. Much of the falling unemployment rate,
though, was driven by falling participation which reached 63.3
percent in March, its lowest point since 1979, at a time when women
weren’t as prevalent in the workplace.

The reasons for this rapid fall in participation are frequently
debated, and hard to fully lock down.  A significant portion
of those who left the job market since the recession began did so
because they had become frustrated with not being able to find a
job. But other sections of the population are also being removed
from the workforce. Baby boomers, with stock prices largely
returned to pre-recession levels, have been able to leave the
workforce. Also responsible for the exodus from the workforce,
though, are an increasing number of one-time workers filing for
Disability Benefits. Since the recession ended, the number of
people receiving Disability Benefits and not counted in the labor
force has grown by nearly 2 million. 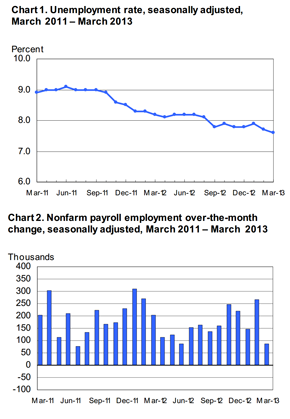 March’s report was a depressing contrast to February’s
numbers; on an industry level, though, there were some notable
changes in employment. Temporary staffing firms added 20,300
positions in March and nearly 160,000 in the last year as employers
continue to add staff, but seek to maintain a level of flexibility.
During the first month of sequestration, just 2,000 jobs were
lost in the Federal Government outside of the Postal
Service.

After several months of strong employment numbers, March’s
report showed that the path of recovery is never a smooth one. If
March is a change of course or an aberration may take several
months to understand. What is clear is that the dynamic of the
American workforce continues to shift with a remarkably low level
of unemployment for those with an advanced education, while those
with less education or professional experience bear the brunt of a
variable job market.