Unemployment in the United States showed little change for June,
with employers adding a better-than-expected 195,000 positions,
leaving the rate steady at 7.6 percent, according to the Bureau of
Labor Statistics (BLS). Some of the biggest gains were seen in the
leisure and hospitality sector, retail trade, healthcare, financial
activities and professional and business services.

In light of the positive growth – analysts had predicted payrolls
would rise by approximately 160,000 for June – and signals from the
Federal Reserve that the labor market was strong enough to handle a
reduction in the stimulus package, the employment picture appears
to be slowly improving.

“The job market continues to gracefully navigate through the
strongly blowing fiscal headwinds,” Mark Zandi, chief economist of
Moody’s Analytics, told USA Today. Across the industries, leisure
and hospitality added 75,000 jobs, with employment in food services
and drinking places continuing to expand, increasing by 52,000. The
amusements, gambling and recreation sector continued to trend up,
adding 19,000 positions. 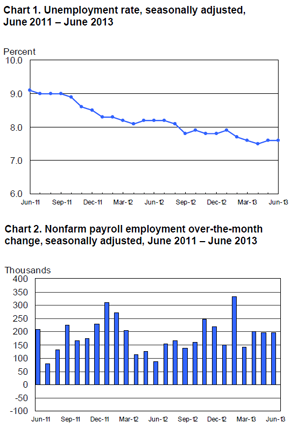 Employment in the professional and business services rose
by 53,000 in June, with the management and technical consulting
services segment gaining 8,000 positions, the computer systems
design and related services segment adding 7,000 and the temporary
help services sector making gains of 10,000.

For those with a four-year degree or higher, the unemployment
rate edged up slightly, from 3.8 to 3.9 percent. Meanwhile the
professional, business, and financial operations unemployment rate
fell from 4.4 to 4.2 percent year-over-year.

In the retail industry, total employment rose by 37,000, with
building material and garden supply stores adding 9,000 in June.
Employment also rose in the motor vehicle and parts dealers sector,
which added 8,000 jobs, and the wholesale trade segment increased
by 11,000 jobs.

The financial activities sector rose by 17,000 jobs in June,
with some of the largest growth seen in the credit intermediation
and insurance segments.

Healthcare also continued to make gains, adding a total of
20,000 jobs in June. Employment trended up in ambulatory healthcare
services, which added 13,000 jobs, and 5,000 people were hired at
hospitals in June, following a loss of 8,000 in May.

Employment fell in the public sector, with the federal
government losing 5,000 jobs in June. All other major industries,
including mining, manufacturing, transportation, logging and
construction, remained mostly unchanged. The lack of movement in
the manufacturing sector came on the heels of a report by the
Institute for Supply Management that found expansion was slowed in
June by a drop in new orders for exports. However, imports rose by
1.9 percent, which may be a sign that domestic demand and
production is picking up.

Part-time employment in June increased by 322,000, with many
people working an abbreviated work week because they were either
unable to find full-time employment or their hours had been
reduced.

The Fed will now continue to access June’s data from the BLS to
determine if it’s time to cut back on policies designed to
stimulate the economy. Chairman Ben Bernanke had said that the
stimulus program may be eliminated once the jobless rate falls to 7
percent.