The Labor Department reports that the U.S. unemployment rate
remained unchanged in June at 8.2 percent while adding 80,000 jobs,
mostly in the professional services sector. The first quarter of
2012 averaged a gain of more than 225,000 positions per month,
while the second quarter averaged just 75,000. 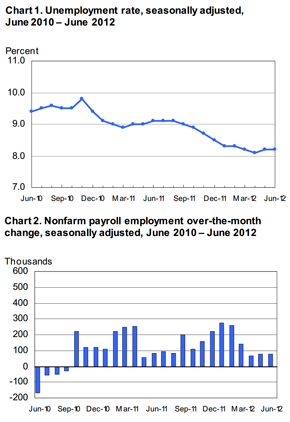 Despite being above average for the quarter, June’s figures were
some of the most negative of the year. While 47,000 professional
services jobs were added in the month, nearly half of those were
temporary positions. The healthcare sector, which has averaged
nearly 30,000 positions per month over the last year, added just
13,000 jobs during the month. June, however, saw the Affordable
Care Act’s individual coverage mandate upheld by the U.S. Supreme
Court, setting the stage for insurers and health care providers to
begin preparing for a substantial increase in their patient base
within 30 months.

The business, management, and related occupations unemployment
rate fell from 4.7 to 4.4 percent year-over-year with the largest
decline occurring in the management, business, and financial
operation segment, where it fell from 4.6 to 3.8 percent. The
bachelor’s degree and higher unemployment rate, which is seasonally
adjusted, rose from 3.9 percent to 4.1 percent as both the size of
that population and its employed portion fell.

In 2011, employment growth also slowed during the summer months.
Yet, June was the first month of 2012 to report lower job growth
than the year before. Economists project employment gains will
rebound moving into the fall, rising to a monthly average closer to
120,000 positions gained. However, even at that level, growth will
not be enough to meaningfully move the unemployment needle.

While June’s employment report was clearly one of the most
sobering of the year, it also points to a broader trend of less
movement in the labor market. While hiring has not been high,
layoffs have been even lower. General merchandise stores were the
only sector to see significant decreases in their employment, down
12,500 positions. Employers have continued to adopt a wait-and-see
attitude as activity on several fronts-especially for non-critical
roles-has slowed. Though what employers are waiting for-a
resolution to the euro debt crisis, implementation of the
Affordable Care Act, the U.S. presidential election, the fiscal
cliff-remains unclear.