When the Bureau of Labor Statistics released its monthly
employment report for January, it also released revisions to data
for all of 2012, revisions that were remarkably more positive than
what had been previously reported. In total, 647,000 more jobs were
created in the United States last year than BLS reports had
indicated. While that is only about 0.41 percent of total U.S.
workforce, it significantly alters the estimate of year-over-year
growth. As of January, before the adjustment, total employment
year-over-year was up less than 1.2 percent. With the adjustment,
average growth in 2012 grew to more than 1.5 percent, in line with
the 40 year average, and well above the 20 year average of 1.1
percent annual growth. In fact, in the last 10 years employment has
only grown an average of 0.3 percent per year. By these metrics,
2012 was at least an average year for employment growth and in
recent history was actually above average.

This year, however, is already presenting new challenges and
changing dynamics. The debt crisis in Europe has backed off from
the cliff, putting a pin back in one of the largest potential
economic grenades on the horizon. Yet, the cost-cutting effects
from sequestration appear increasingly unavoidable and will in the
coming months have measurable consequences across the military,
military support, research, education and other sectors that rely
heavily on government support. 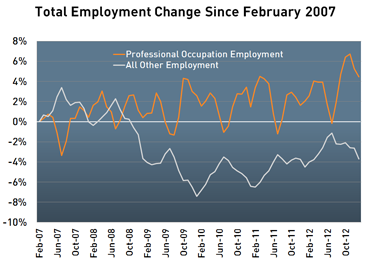 While the cuts will have a rapid near-term effect on employment,
they may also create a temporary talent acquisition opportunity for
employers. Many of the positions affected are filled by highly
trained people in disciplines that have continued to experience
increasing talent shortages in recent years.

“In layoffs like these, that have nothing to do with job
performance but rather fallout from much larger issues, highly
qualified and capable people end up entering the job market,” says
Rob Romaine, president of MRINetwork. “It
means a short window of availability for private sector employers
to scoop up experienced professionals in disciplines like
engineering, IT, accounting, and project management.”

Total employment in the U.S. shrank by more than 6 percent
during 2008 and 2009. Yet, despite comprising more than 20 percent
of the U.S. workforce, employment of those in professional and
related occupations remained essentially flat during those years
and has since resumed its pace of growth.

“Historically, government layoffs in sectors like defense have
had only a short-term impact on employment because the types of
people who are laid off are inherently highly employable,” notes
Romaine. “While these cuts will be reaching far beyond defense
spending, the principle still applies for many of the industries
that will be affected, which points to an opportunity for
employers.”

This isn’t to say that sequestration will be a big boon for the
U.S. economy. Many economists project sequestration will remove as
much as 1.5 percent of GDP from the economy in 2013 and blame it
for the sharp decline in GDP growth during the 4th quarter of
2012. Private-sector activity, however, is rebounding, and in the
4th quarter was enough to counter nearly a 15-percent drop in
government expenditure and keep total GDP growth virtually
flat.

“There was such a shortage of experienced talent before the
recession that even with the sharpest economic decline in more than
a generation, professional employment levels didn’t decline,” notes
Romaine. “While the economy may slow again by the end of the year,
we shouldn’t expect that to lower the demand for professional
talent nor affect the availability of experienced
professionals.”