The Labor Department reported that 171,000 jobs were added in
October while the unemployment rate rose from 7.8 to 7.9 percent as
workforce participation increased. Positive revisions to September
and August also added a combined 84,000 positions to the previously
reported levels. During the first 10 months of 2012, employment
growth has now averaged 157,000 jobs per month, about 32,000
positions a month faster than the U.S. workforce grew over the same
period last year. 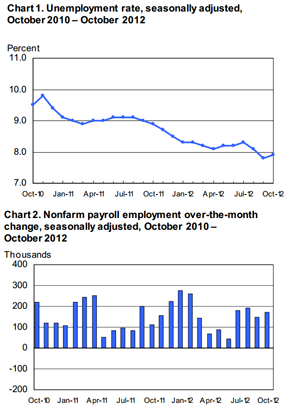 On an industry basis, growth was largely contained to the
private service-providing sector, though specialty trade
contractors did add 16,800 jobs during the month. Retail trade
added a seasonally adjusted 36,400 positions leading up to what is
widely expected to be a strong holiday shopping season. Food and
drinking places added 22,900 jobs, while healthcare added 30,500
positions.

While September’s report, showing a .3 percent drop in the
unemployment rate, was widely seen as very positive, its one
significant deficit was that a large portion of the job growth
(582,000) was attributable to part-time positions. In October’s
report, the trend reversed itself as those employed part-time for
economic reasons fell by 269,000 and those positions presumably
became full-time.

This most recent report is clearly one of the best yet recorded
in 2012 and many of its underlying figures seem to add more
foundation to the stability of the labor market and the economy.
Not just more employment is evident, but better employment:
full-time positions, four-year degreed employees, and many in
professional fields. It should be noted, however, that the
employment reports have been a fickle thing over the past several
years. Positive reports in the last half of the year have been
tempered by slowing growth in the first half. With the European
Union’s unemployment rate holding at a record high of 10.6 percent,
growth in Asia still slowing, and with the U.S. government’s as of
yet unresolved “fiscal cliff” looming, there is reason to be
cautious while we look to see if this rate of growth will continue
into next year. Nevertheless, more than at any point in the last
several years, there may also be more reason to be optimistic.